From May 1 to May 10 of this year, an old, abandoned theater in Baldwin Hills was turned into a giant gallery with over 200 works of art by over 150 artists for a pop-up art exhibit called Manifest Justice.


The large-scale exhibit featured art that spoke to social justice issues; everything from gender wage inequality to mass incarceration, but—with the people of Baltimore still out in the streets protesting the death of Freddie Gray—works of art that dealt with police brutality and police murder seemed to speak to people the most. 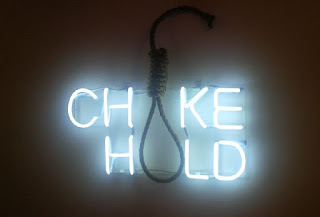 There was an installation piece by Artist Ti-Rock Moore called, “Protect and Serve,” that consisted of a neon sign of the words, Choke Hold, but with the letter O being substituted by a noose; there is no mistaking the connection the artist was making to how Black people were treated by the KKK, in the days after the end of the Civil War, and the way they are treated by the police today.


“Dis Arm,” an image of a police baton on fire, by well-known Street Artist Robbie Conal, seemed to be there to remind us that the anniversary of the 1992 L.A. Rebellion had just passed.


Other pieces even seemed to speak about the future.  For instance, a painting by Graffiti Artist Mear One, of a youth wearing a gas mask and kaffeiyah, holding a large shield with the words, “Fight For Humanity,” spray-painted on it.


Another piece, “American Dreamers (Phase 2),” a large installation of a gutted police car in the middle of the floor, couldn’t help but stand out to most people.


Looking at this piece, (which was made to look like an NYPD car on one side, and a Ferguson police car on the other side), one could imagine a future society where this art piece was actually a relic of a horrible, long-forgotten past.


The car had many plants, a sort of garden, growing from inside it.  And, in an interview with a local TV station, the creator of the piece, Jordan Weber said, “It’s a symbol of young black Americans who have not come to fruition before being taken.”


It is very significant that many artists are being brought together to display these kinds of art pieces to large crowds; art that makes people confront the reality, injustice and horror going on right now.


At this time, there are no plans to take the Manifest Justice exhibit to other cities, but you can see photos of most of the pieces mentioned here, (and many more), at www.manifestjustice.org/artists
Posted by koffee-kommie at 2:23 PM 1 comment:

Add to your bookshelf: Genius Vol 1 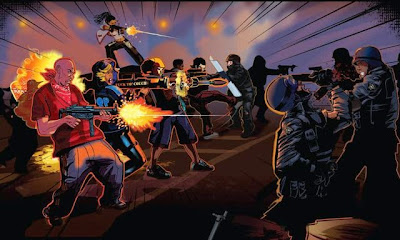 Tomorrow, (May 27, 2015), marks the release date of "Genius," Vol 1, which collects the five issue mini series, (and "pilot" issue), of the story of a young Black teen named, Destiny Ajaye, who unifies all the gangs in South Central L.A. to fight against the police.

A Black female as the lead character in a comic-book would be enough to grab a headline, but this series was catching a lot of people's attention last year--when it first came out--because it was released during the time of grand protest and upheaval in Ferguson, Missouri.

In "Genius," Destiny is fighting against the police, after having witnessed the brutal murder of her parents by the LAPD; meanwhile, in real life, the people of Ferguson took to the streets, destroying property--especially police cars, after the local district attorney said that he would not press charges against the police officer who killed a young, unarmed, Black man.  (Coincidentally, this Vol 1 release comes right on the heels of another rebellion against police murder, this time in Baltimore).

The story in "Genius" is not perfect.  There are a lot of things a revolutionary would disapprove of:  For instance, Destiny is not using ideology to become a revolutionary leader; she actually ends up being the top dog in the gang underworld by sleeping with a top gang-member and killing many rivals.

She is also uniting gang members based mostly on revenge, not mostly on the idea of creating a better world.  (There is also a dialogue problem because I cringed every time I read something that sounded like it was coming from a Nuyorican in the Bronx, rather than a South Central Chicano).

Despite all this, I really like this story because it shows people actually fighting back against the police--in the only way they understand, and it's a story that tells us that there is potential for a kid in South Central to be a military genius.  One great thing I really liked about the character is her understanding that she also needs to win public opinion during the fight with the LAPD.

For anyone interested, you can download the pilot/preview issue for free and read it on your tablet or mobile device.

Posted by koffee-kommie at 4:14 PM No comments:

A few months back, I was introduced to the art of Starchild Stela when someone posted a photo of one of her pieces on Twitter.  It was so different, so colorful, so political, and cute! She instantly became my new favorite street artist.  (She considers herself more of a feminist graffiti artist and not a street artist per se).


Dr. Jessica N. Pabon, who interviewed Stela for her blog, described her style like this, “Stela’s work caught my eye because her absolutely curvilinear handstyle, pastel color palette, and pretty soft-eyed characters are almost always adorned with explicit and aggressive language.”


Indeed, it is that juxtaposition of cute, big-eyed, (almost anime style), female characters, with strong political messages, which sets her apart from her contemporaries.


I think it works artistically because, even though her drawings seem simple, they are colorful and full of life.  And, I think, it works politically because there is an element of humor to it, (which is what I believe makes Banksy so popular among basic masses).


Take for example, a cute little girl with the words, “Fuck your macho bullshit” spray-painted under her; or her clever drawing of a woman with some kitties and the words, “Cats against cat-calls.”


In the same interview referenced above, Stela says about her work:

"I love adding a little feminist twist to my pieces. I don’t really intend to add a social message to my pieces, the words I add often reflects the discussion I’m having with friends. But indeed we are talking about what matter to us, and what makes us pissed off."

Check out more of her work—and support her—by buying some of her stickers, prints, and original art from her online store.
Posted by koffee-kommie at 6:21 PM No comments:

Add to your Bluray collection: Killing Them Softly 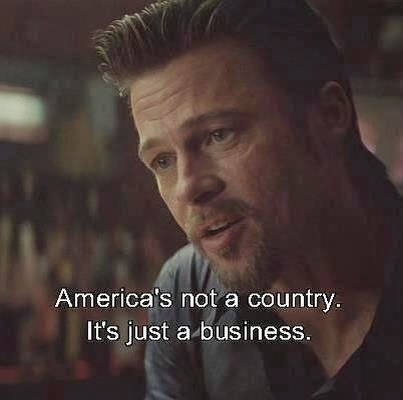 From the start of the film you see that, besides being a gangster flick, it is also a very political film.  It takes place during the presidential elections of 2008, and we meet the first characters, two heist-men, having a meeting in an empty lot with Obama and McCain billboards in the skyline.


The heist-men do a sloppy—but successful—job robbing a card game run by local mobsters.  This is where Brad Pitt’s character, Jackie Cogan, is brought in: to hire independent contract killers to take care of those heist-men.

One of the many interesting scenes involves Jackie Cogan telling the mob representative who hires him how emotions can sometimes hinder an assassination attempt.  He tells him he likes "killing them softly," from far away.

Another interesting thread in the story is how they handle the guy running the card game, Markie (Ray Liotta).  Markie had nothing to do with the robbery, but since people on the street think he had something to do with it, then Markie needs to get whacked.  (If you read all the above and don't think about Blackwater, drones, Iraq, or Afghanistan, then I don't know what to do with you).

In a statement found on a promotional website for the film, Director Andrew Dominik says:

"I've always felt that crime dramas are essentially about capitalism, since they show the capitalist idea working in its most base form.  It's also the only genre where it's completely acceptable that the characters are motivated only by a desire for money.  None of this 'family values,' 'follow your dream,' moral compass bullshit."

Unfortunately, this film fell way under the radar when it was released in theaters in 2012.  It is also very much dialogue driven, which can be hard for an audience that has been trained to love only action driven films.


If you didn’t love Brad Pitt before, you’ll love him in this role, as a no-nonsense enforcer who delivers some of the best dialogue that takes a shit on American Democracy—which also includes some of the best final lines in any movie I can remember.
Posted by koffee-kommie at 6:37 PM No comments: